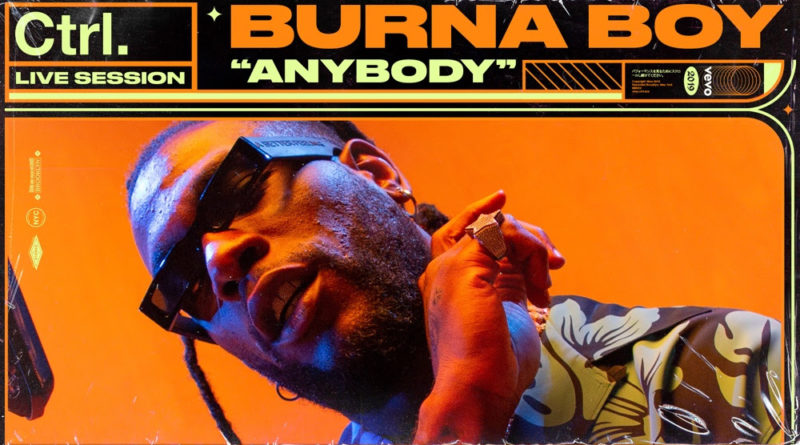 Video
September 3, 2019September 5, 2019 rgarcia Burna Boy shares performances for Vevo Ctrl
Vevo and Burna Boy Release Videos of “Anybody” & “Collateral Damage”
Sessions filmed as part Of Vevo’s New Original Content Series, Ctrl
Vevo announces Burna Boy as the next artist in their new Ctrl series with performances of “Anybody” & “Collateral Damage” premiering today.
Vevo’s Ctrl series highlights the work of hard-hitting, cutting-edge musicians making an impact in today’s music scene – both emerging and established. These artists demand attention, and Vevo’s Ctrl shines a deserving spotlight. Shot in Vevo’s Brooklyn studio, Burna Boy’s performances follow sessions from Rick Ross, NAV, Flipp Dinero and A$AP Ferg.
With his fusion of dancehall, reggae, Afrobeat, and pop, Burna Boy emerged in the early part of the 2010s as one of Nigeria’s fastest rising stars. The LeriQ-produced 2012 single, “Like to Party,” proved to be his breakout track and paved the way for his full-length debut, L.I.F.E., a year later. His international exposure widened with 2018’s “Outside” which hit #3 on the Billboard Reggae chart. In advance of his next LP, 2019’s African Giant, Burna made his first appearance at Coachella.
Burna Boy was born Damini Ogulu in Lagos in 1991. He began making music when he was just ten years old, and at school, a fellow classmate gave him a copy of the production software FruityLoops. Armed with these means, he began to create his own beats on an old computer. In 2010, the 19-year-old Ogulu traveled to Nigeria’s southern coast where a mutual acquaintance, producer LeriQ, had some studio space. This marked a period when he began to connect to the music of his native country, having spent most of his youth immersed in American acts like DMX. He delved into the dancehall and reggae music his father listened to, and the Afrobeat music that his grandfather preferred (he’d also been Fela Kuti’s first manager). As a result of his new discoveries, Ogulu created a confluence of genres that would become his signature sound.
“Anybody” & “Collateral Damage” are now streaming on all platforms. Keep up with exclusive content from artists all over the world on YouTube.com/Vevo.
ABOUT VEVO: Vevo is the world’s largest all-premium music video provider, offering artists a global platform with enormous scale through its distribution partners. Vevo connects artists with their audience globally via music videos and original content, working directly with them to find unique ways to bring their music to life visually. Vevo also works with emerging artists, providing them with a platform of global scale and reach, to find and grow their audience. Reaching 26 billion monthly views globally, Vevo has over 400,000 music videos in its catalogue.