Event
July 29, 2021 rgarcia DAYS OF SUMMER CRUISE FEST with LIL BABY & Host DJ KHALED Returns July 2022 - Hip-Hop's Premiere Music Festival Cruise To Sail Aboard The Norwegian Sky
Days of Summer Cruise Fest has announced early details for their 2022 edition. Sailing aboard it’s new home on the Norwegian Sky out of Miami through Nassau and Great Stirrup Cay, the cruise will take place July 1-4, 2022 and will feature Lil Baby and will be hosted by DJ Khaled.  All cabins aboard go on sale today (July 29) at www.daysofsummercruise.com
The four-night/three-day sailing for hip-hop’s premiere music festival cruise experience is much more than a concert.  Hosted by DJ Khaled, fans will get to experience firsthand unique sets by Lil Baby and many of today’s most notable names in hip-hop (which will be revealed in the coming weeks) in various areas aboard the luxury liner as well as island excursions on two of Norwegian’s private islands.
The Norwegian Sky, refurbished from bow to stern in 2019, offers something for everyone. Beyond the music, the Bahama cruise options are nearly limitless with 10 dining selections, a wide variety of bars and lounges, an onboard spa, and a cruise casino with a variety of games and slots. Days Of Summer festival cruisers will also be offered a wide variety of activities including pool parties, games, impromptu DJ sets and much more.
Days of Summer 2022 will mark the second sailing for the festival music cruise. The previous outing took place aboard Carnival’s Victory in June 2019 with hip-hop heavy hitters Post Malone, Cardi B and host DJ Khaled with DaBaby, City Girls and Dej Loaf, just to name a few.  Event organizers also produced DJ Khaled’s Summerfest Cruise in 2017 with Future and A$AP Rocky. 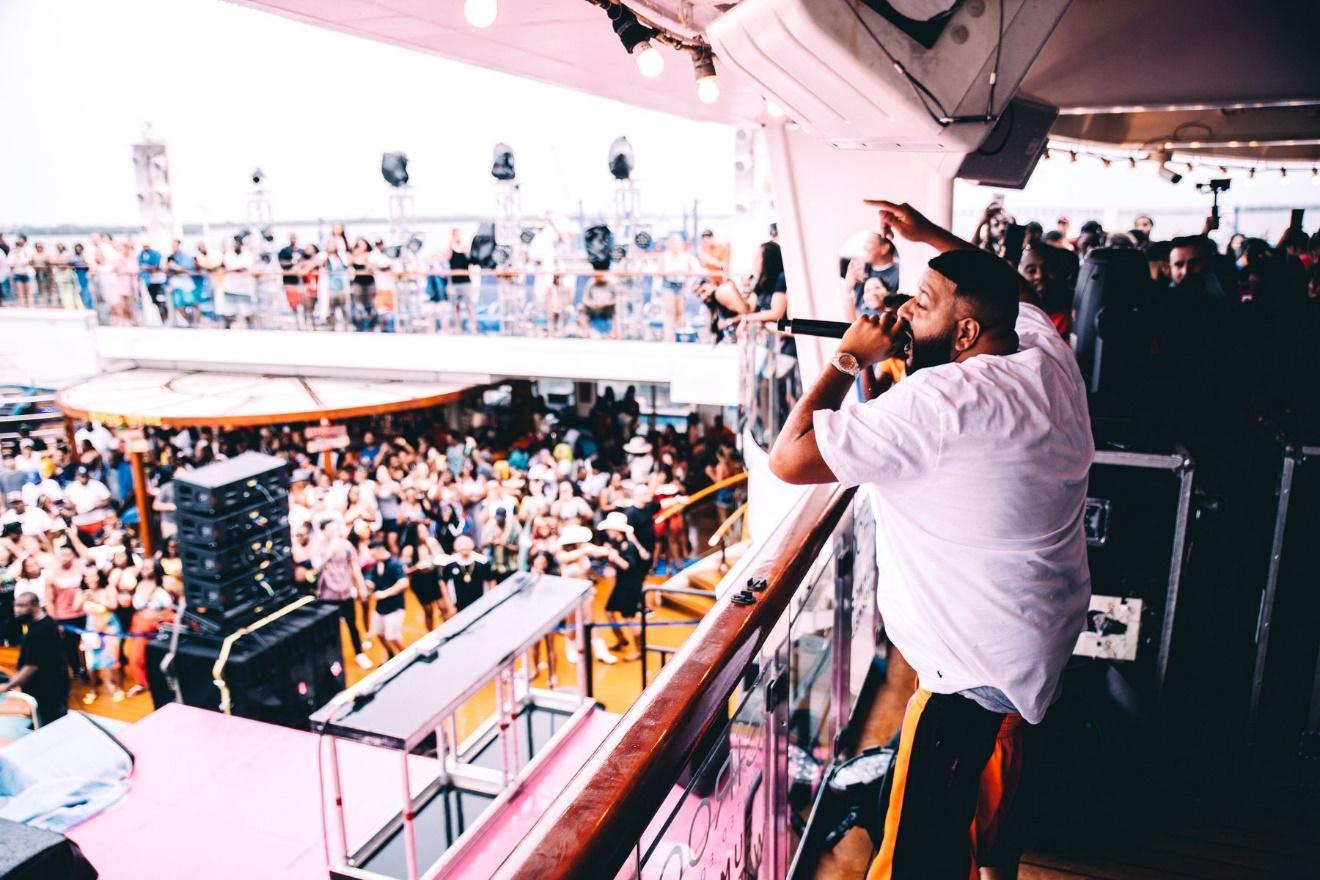 DJ Khaled performs aboard the 2019 Days Of Summer Cruise Fest. 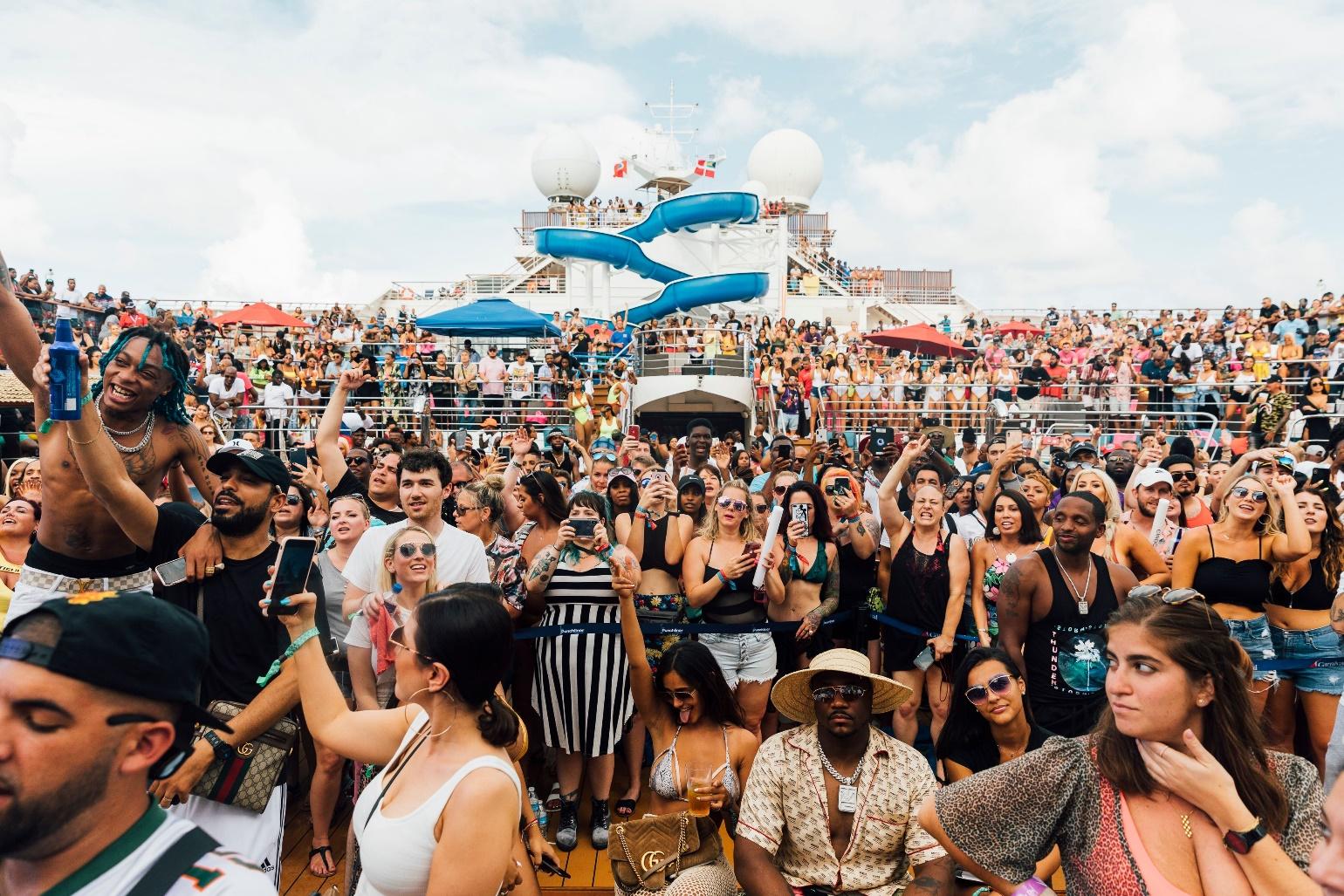 Crowd aboard 2019 Days Of Summer Cruise Fest.
“The Verdict:” shared People’s Janine Rubenstein who came aboard the 2019 outing, “We disembarked early Monday morning and I found myself exhausted, but thoroughly entertained. Sure the non-stop live music by some of the biggest names in hip hop was great, but the folks we met throughout the weekend were nearly just as exciting. Nowhere else on the high seas will you hear a group of women debating whether Cardi B and Nicki Minaj‘s beef equates to that of Biggie and 2Pac, or watch a twerk contest devolve into a full on acrobatic performance. It turned out to be exactly what I thought I’d signed up for, if not so much more.”  The event was also supported by a wide variety of media including Rolling Stone, Billboard, COMPLEX, HipHopDX, The Source, TheFADER, Hypebeast, Cruise Critic, Sun-Sentinel and much more.
Cabins and suites are available for 21+ cruisers to purchase now from a selection of levels with a special $99 deposit if made before September 1, 2021.  Further info can be found at www.daysofsummercruise.com