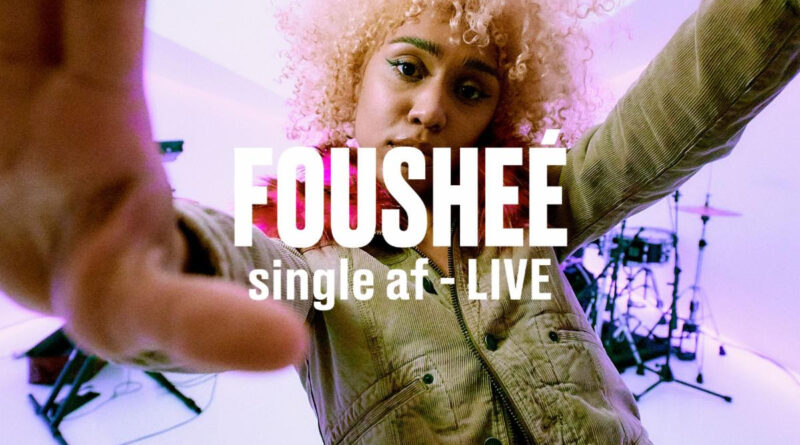 R&B Rap
March 10, 2021March 10, 2021 rgarcia Fousheé releases live performance videos of "single af" and "Sing About Love" with Vevo DSCVR
Vevo, the leading global music video network, announces the release of Fousheé’s DSCVR performances of “single af” and “Sing About Love.” Vevo DSCVR focuses on the development of emerging artists, through performance content and careful curation. Vevo has a long history of helping emerging artists break through to new and wider audiences. Past alumni of Vevo’s DSCVR series include Billie Eilish, AB6IX and Alfie Templeman. Vevo is committed to working with artists at an early stage of their career to create unique content that brings their music to life visually and provides exposure to new audiences through the platform.
Fousheé grew up with music in the forefront her entire life. Her mother, who hails from Jamaica, got her start in music as the drummer for a female reggae band named PEP before moving to America and starting a family. During her early childhood, Fousheé was exposed to a variety of different sounds from her mother’s record collection including Bob Marley,Toni Braxton and Etta James who she now counts as influences along with artists she personally gravitated to over the years like Frank Ocean.
Writing her first song at age six and performing with different girl groups created with childhood friends throughout her formative years, Fousheé always knew that she wanted to pursue a career in music seriously. Yet, she found herself following in the normal footsteps of a teenager and enrolling in college, while still working on music and performing at local café’s on the side. It wasn’t until she and her mom were involved in a serious car accident that forced her to drop out and help her mom recover from injuries that she fully realized how important her dreams were.
After living in NYC and experiencing its music scene, Fousheé set her sights on LA, honing her craft in a community of creators that embraced her. In 2020, Fousheé’s voice was streamed by millions as the hook on Sleepy Hallow’s viral track “Deep End (Freestyle),” eventually leading her to reveal her identity in a TikTok video that racked up six million views. In July she released her own version of “Deep End” along with an accompanying visual which is an ode to Blaxploitation films from the 70’s. With a clear creative vision, Fousheé is ready to show the world who she is.
“single af” and “Sing About Love” are now streaming on all platforms. Keep up with exclusive content from artists all over the world on YouTube.com/Vevo.