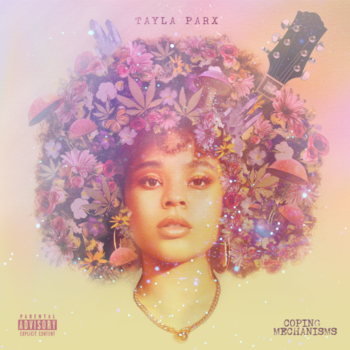 News R&B
November 21, 2020November 21, 2020 rgarcia Grammy-nominated artist Tayla Parx's new album Coping Mechanisms out now + Video for "System" premieres today
November 20, 2020—Coping Mechanisms, the new album from Grammy-nominated artist Tayla Parx, is out now on TaylaMade/Atlantic Records. Listen to/share the record HERE.
“Coping mechanisms come into play once your defense mechanisms fail,” Parx explains. “There’s a difference. Defense mechanisms are passive. They are embedded in you at a very young age, and you can’t open this box until you’re older and understand who you are. Your body, mind, and heart passively react to avoid being hurt. The defenses typically fail. Once life happens, you only have your coping mechanisms. You have to make sure they’re as strong as possible, and you’re aware of them. Coping mechanisms are what you actively do in order to provide yourself with the stability and mental capability to get through anything life throws your way—whether it’s heartbreak or your job. They are actions you take to better yourself.”
In conjunction with the release Parx is premiering the video for the album track “System,” which was directed by Joe DeSantis and features Antonio Hudnell, Comfort Dedoke and Craig Fishback. Watch/share it HERE.
The new music continues to receive critical praise:
“Coping Mechanisms will prove her a force in modern pop music.”

“Add ‘Dance Alone’ to the canon of great dance hits about, um, dancing
alone; the song’s chill mood makes you wanna shuffle back and forth and do some
self-reflecting under the neon lights.”

“[‘Dance Alone’] speaks for a lot of us with this mid-tempo ’70s soul groove, which
has perhaps the defining chorus of 2020.”

“Her second album, Coping Mechanisms, just might catapult her to the forefront of
mainstream consciousness thanks to a bevy of tightly mixed dance jaunts (and at least one haunting ode to perpetual lovesickness). After helping others establish their widely revered sound, a spotlight eagerly awaits Parx and her pop prowess.”

In 2019 Parx released her debut album, We Need To Talk, via Atlantic Records to widespread praise; The New York Times proclaimed, “The new album, like Parx’s best hits, is playful and conversational, blending pop, R&B and traces of rap with plenty of Grande-esque high notes,” while Rolling Stone called it “a solid pop manifesto from a child-star-turned-pop-savant.” Entertainment Weekly added, “[Parx] exploded as one of pop music’s go-to songwriters.”
Taylor Parks, known by her stage name Tayla Parx, was born and raised in Dallas where she trained with legendary choreographer Debbie Allen who encouraged her to pursue acting and singing. After moving to Los Angeles, she began honing her musical talents and released her 2017 mixtape, TaylaMade, which has garnered over 25 million streams to date. When Parx released We Need To Talk she was the first female songwriter to have three simultaneous top 10 songs—Ariana Grande’s “7 Rings” and “thank u, next,” and Panic! At The Disco’s “High Hopes”—in the Billboard Hot 100 since 2014 while also winning Billboard’s “2019 Hitmaker Award.”
Parx is Grammy-nominated for her work on Grande’s thank u, next, “7 Rings” and “My Everything,” Janelle Monáe’s Dirty Computer, Christina Aguilera’s “Like I Do” featuring GoldLink, The Internet’s “Ego Death” and Hairspray. In 2019 Parx performed as a special guest on Lizzo’s “Cuz I Love You Tour” and Anderson .Paak’s “ABC Tour” while launching Burnout, a landmark new songwriting camp with the aim of fostering perspective, balance and self-care for creative artists. The premiere Burnout camp was held in Brooklyn last October, with further camps planned for the coming months. Additional information can be found at twitter.com/blazingburnout.
COPING MECHANISMS TRACKLIST
1. System
2. Broke
3. NonChalant
4. Nevermind
5. Residue
6. Stare
7. Dance Alone
8. Fixerupper
9. Justified
10. Lost Words
11. Sad
12. You Don’t Know