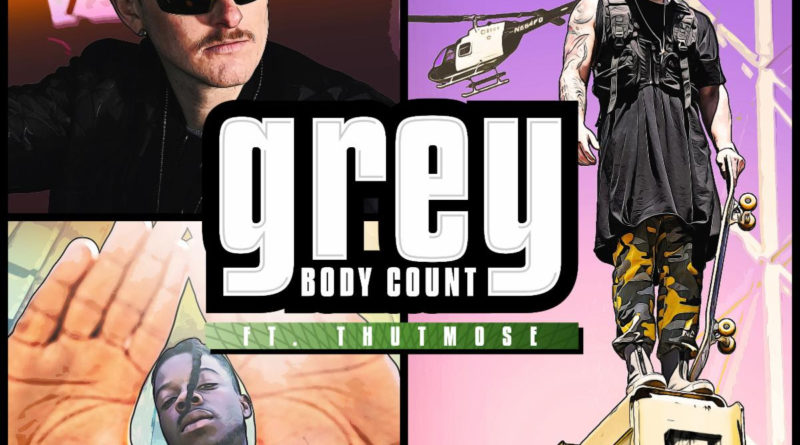 (January 17, 2020 – New York, NY) Production-duo Grey is back with a “GTA”-inspired new single accompanied by an action-packed music video for “Body Count.” The track has a catchy melody paired with dark and intimidating, yet playful lyrics. Directed by Omni, and taking place in Los Angeles, the video opens with Grey’s Michael Trewartha as an avatar for a video game being played by Thutmose. Unbeknownst to the player, the game seems to come to life when Michael’s avatar shows up at the home of the player, pulling the Nigerian-American rapper along for the wild ride. The two roam the streets of LA, evading the police (played by the other half of the Grey duo, Kyle Trewartha) singing “I’ve got a hit list, and baby you’re up next.” Listen to “Body Count” HERE.

ABOUT GREY:
Los Angeles-based production duo composed of brothers Kyle and Michael Trewartha kicked off 2019 with three GRAMMY nominations and took home both a Billboard Music Award for “Top Dance/Electronic Song” and the iHeart Radio Music Award for “Best Song” for “The Middle” with Zedd and Maren Morris.  Known for RIAA 3x-platinum “Starving” with Hailee Steinfeld and Grammy-nominated single “The Middle” with Zedd and Maren Morris, the duo has accumulated over 3 billion streams combined. Upending expectations and reimagining the musical landscape itself, Grey dive beyond the superficial surface and emerge with a signature style and sound of their own.