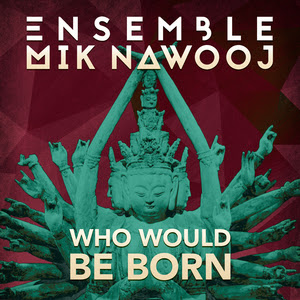 Rap
February 24, 2021February 25, 2021 rgarcia Hip-hop orchestra Ensemble Mik Nawooj debuts new track and video "Who Would Be Born" from forthcoming album Death Become Life out March 19, to host album release livestream on March 25
February 23, 2021—Oakland-based hip-hop orchestra Ensemble Mik Nawooj unveils a new track today, “Who Would Be Born,” alongside a video, which exclusively premiered last week via Glide Magazine—watch it here. The new track is from the group’s forthcoming album, Death Become Life, out March 19.
Inspired by Herman Hesse’s Demian, “Who Would Be Born” is an apocalyptic rap score on the destruction of the world and Gnostic god Abraxas. “The general idea of this piece was to portray the end of the old and beginning of the new,” EMN’s composer JooWan Kim says.  “The whispers at the end of this piece are magical syllables within the Mik Nawooj universe called ‘Syllables of Transmutation,’ which allow the user to open up all five energies of internal organs and transform into a god.”
The new track follows the first offering from Death Become Life, “Beethoven on Struggle,” which premiered exclusively via Mundane Magazine and was praised by RIFF Magazine as a “masterpiece.”
Additionally, Ensemble Mik Nawooj will host an exclusive album release livestream event co-presented by San Francisco’s Asian Art Museum and Yerba Buena Gardens Festival on March 25 at 7pm PST, featuring a 22-piece orchestra performance, the premiere of five music films documenting the recording of the album and a Q&A portion with panelists from the ensemble. Tickets are now available for purchase on the Asian Art Museum’s website here.
Furthermore, JooWan Kim and Christopher Nicholas from EMN recently appeared on Georgio Savvides’ podcast Hip Hop Orchestra Presents to discuss the group’s inspiration, method sampling and more—watch a clip here.
Death Become Life consists of ten tracks and five accompanying live performance videos. Three of the compositions—together known as the Fountainheads Suite—are a direct response to COVID-19 and its disproportionate effects on marginalized communities, meditating on concepts such as finding peace in conflict, joy in sadness and freedom in confinement and aiming to help audiences from all walks of life heal from the trauma of the pandemic. The Suite’s three compositions deconstruct classic works of Mozart (“Mozart on Joy”), Beethoven (“Beethoven on Struggle”) and Bach (“Bach on Transcendence”), and each corresponds with a principle of Greek philosophy: Ataraxia (freedom from fear of death), Apatheia (freedom from violent emotions) and Eudaimonia (blessedness).
Among the album’s other tracks are pieces about the passing of Kim’s mother and a longtime family friend in 2014, an apocalyptic rap-score on the destruction of the world and three selections from the group’s multidisciplinary theater and dance project, Death Become Life, through which they collaborate with region-specific artists to render variations in live performances. The accompanying five performance videos are co-sponsored by Asian Art Museum and Yerba Buena Gardens Festival.
Ensemble Mik Nawooj is led by artistic director and classically trained South Korean composer JooWan Kim, who became increasingly disillusioned with Eurocentric concert aesthetics while studying music composition at Berklee College of Music in his 20s. Eventually, Kim found the missing ingredient and his ultimate inspiration in hip-hop, describing the epiphany he had upon hearing N.W.A.’s Straight Outta Compton for the first time. “I knew at that moment, I had to examine the underlying structures of hip-hop and create concert music with them,” Kim says. Ever since, Kim has been making music with his own multiracial and multi-genre crew—consisting of classical musicians like flute, clarinet, violin, cello, bass, soprano, a hip-hop MC (Sandman) and a Turf dancer—to bridge the gap between tradition and the modern day.
ENSEMBLE MIK NAWOOJ—DEATH BECOME LIFE
1. Death Become Life
2. May Good Conquer Evil
3. May Death Become Life
4. Everything Ends
5. Hymn
6. Everything Returns to One
7. Who Would Be Born
8. Mozart on Joy
9. Beethoven on Struggle
10. Bach on Transcendence