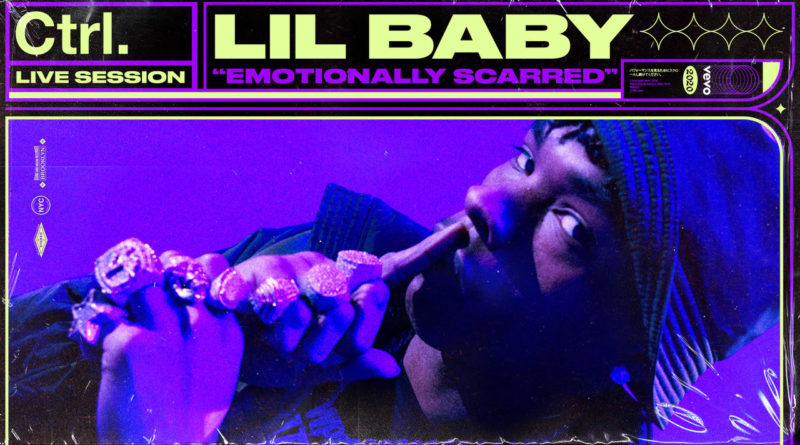 Video
March 6, 2020 rgarcia Lil Baby performs Emotionally Scarred with Vevo
Vevo announces Lil Baby as the next artist in their Ctrl series with a performance of “Emotionally Scarred” premiering today.
Vevo’s Ctrl series highlights the work of hard-hitting, cutting-edge musicians making an impact in today’s music scene – both emerging and established. These artists demand attention, and Vevo’s Ctrl shines a deserving spotlight. Shot in Vevo’s Brooklyn studio, Lil Baby’s performance follow sessions from Rick Ross, Common, Rapsody, Fat Joe, Jeezy, Jadakiss, Fabolous, A$AP Ferg and more.
Charismatic, confident Atlanta-bred rapper Lil Baby quickly rose to fame after he launched his career in 2017. Following a series of mixtapes, his popularity exploded with the release of the 2018 full-length Harder Than Ever, which included the Drake-featuring hit “Yes Indeed.”
Lil Baby grew up in Atlanta hanging with friends like Young Thug, Coach K, and Pee, leaning more toward a life of petty crime and street hustling while his friends went on to thrive in the music industry. In 2015, at age 19, Lil Baby went to prison for two years for a probation violation. Upon his release in 2017, he jump-started his rap career with a mixtape called Perfect Timing, released in April of that year. The mixtape featured cameos from friends like Lil Yachty, Young Thug, and Gunna, and strong production from 808 Mafia, Brickz, and many others, highlighted by Lil Baby’s woozy flows. The mixtape immediately brought the young rapper fame, in part due to his affiliations with friends in the Quality Control family of artists as well as the 4 Pockets Full clique.
As his mixtape attracted more listeners, Lil Baby worked constantly on new music, releasing singles like “My Dawg” and the Young Thug collaboration “Pink Slip” in the summer of 2017. Other 2017 releases included Harder Than Hard, 2 the Hard Way (with Marlo), and Too Hard. Lil Baby’s debut studio album, Harder Than Ever, appeared in May of 2018. Featuring guest appearances from Drake, Offset, Lil Uzi Vert, and others, the release entered the Billboard 200 album chart at number three. The rapper’s success continued with Drip Harder, a collaborative mixtape with Gunna that was released the following October and reached number four on the Billboard 200. 2019 saw Lil Baby starring in the film How High 2 and releasing a handful of singles including the Future collaboration “Out the Mud.”
“Emotionally Scarred” is now streaming on all platforms. Keep up with exclusive content from artists all over the world on YouTube.com/Vevo.
ABOUT VEVO: Vevo is the world’s largest all-premium music video provider, offering artists a global platform with enormous scale through its distribution partners. Vevo connects artists with their audience globally via music videos and original content, working directly with them to find unique ways to bring their music to life visually. Vevo also works with emerging artists, providing them with a platform of global scale and reach, to find and grow their audience. Reaching 26 billion monthly views globally, Vevo has over 450,000 music videos in its catalogue.