CO-HEADLINING “THE REBEL, THE SOUL & THE SAINT TOUR”
WITH KIRK FRANKLIN;
27 CITY TOUR KICKS OFF OCTOBER 25

Verve Records artist and vocal powerhouse Ledisi is thrilled to release her ninth studio album Let Love Rule TODAY!  A nine-time Grammy-nominated vocalist, Ledisi is excited to share her new body of work with the world as she delivers brand new vibes with classic vocals.  Packed with raw, unequivocal emotion, the 15-track album showcases her evolution as an artist; executive produced by Ledisi and longtime collaborator Rex Rideout, the album also includes contributions from John Legend, DJ Camper, BJ  The Chicago Kid and Kirk Franklin among others. The classically trained vocals remain on full display, but the production bobs and weaves between eras, echoing everything from seventies-style soul to 21st-century bounce. Let Love Rule is the pure essence of R&B music and will take the listener on a journey of life, love, and relationships.

The lead single “HIGH,” which is #9 on the Billboard Adult R&B chart, has garnered airplay across the country including on such influential stations as SiriusXM Heart & Soul and Music Choice R&B/Soul. Ledisi gave an amazing live performance of the single on the 2017 Black Girls Rock! Awards (Click Here). She also released three additional singles that are sure to be fan favorites: “Add To Me,” “Here,” and “Us4Ever” featuring B.J. The Chicago Kid 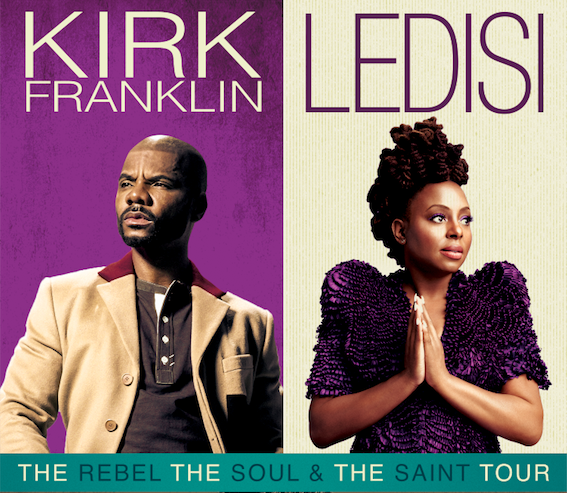 Ledisi will be co-headlining “The Rebel, The Soul & The Saint Tour” with Gospel superstar Kirk Franklin. The 27-city tour will kick off on October 25 in Oakland, CA at Paramount Theatre and will culminate on December 2 in Richmond, VA at The Altria Theatre.  The two will interweave an amazing show that will touch your heart, body, and soul.  The tour will be stopping in major cities across the country including New York, Los Angeles, Atlanta, Sacramento, Chicago, Houston, Nashville and more. Opening up the tour will be PJ Morton [**Major. in selected cities]. Both Ledisi and Kirk Franklin will be performing various fan favorites as well as songs from Kirk’s current album Losing My Religion and a few songs from Let Love Rule. This tour will mark the first time that both artists have been on the road together performing for adoring fans. VIP presale tickets and general public ticketing are already on sale. Fans can log onto to the websites for both Kirk Franklin (Click Here) and Ledisi (Click Here) for more information.

In addition, Ledisi covers Upscale Magazine’s “POWER” issue which is currently on stands. With amazing images taken by photography duo JUCO, she discusses her growing success in music as well as being in love and her commitment to the arts.

Let Love Rule is sold via all digital platforms as well as in stores across the country.  For more information log onto www.ledisi.com.