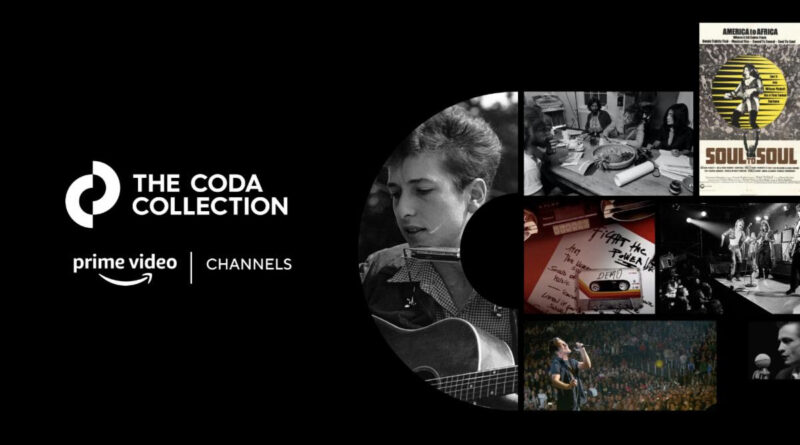 News
January 29, 2021January 29, 2021 rgarcia Archival Performances, Launches Exclusive Channel On Amazon Prime Video And A Dedicated Music Editorial Website Offering Curated Library Of Rare And Never-Before-Seen Concerts, New Multi-Media Company, Newly Created Documentaries, The Coda Collection
CHICAGO, January 27, 2021 – A brand-new multi-media company, The Coda Collection, announces today an innovative experience in music. The new channel reaches across genres to provide fans with exclusive storytelling that details the most iconic moments in music history. The company’s channel – The Coda Collection – will debut world premiere films and feature a curated library of legendary performances and documentaries, all streaming exclusively via Prime Video Channels. This is combined with a rich editorial destination across Coda’s desktop and mobile sites, providing new perspectives on the artists, the music, and the cultural context that makes those moments resonate with audiences around the world. The Coda Collection channel and the dedicated website will bring to life music’s untold stories and deepen the connection between fans and artists.
At the helm is successful entrepreneur and CEO Jim Spinello, director/producer John McDermott, Janie Hendrix of Experience Hendrix, Yoko Ono and the Estate of John Lennon, and veteran entertainment lawyer Jonas Herbsman. Sony Music Entertainment is an equity partner in the new company. In addition, The Coda Collection is excited to announce an extraordinary array of content partners, including Rhino Entertainment, Concord Music, Mercury Studios, Reelin’ In The Years Productions, CREEM Magazine, and many others. In partnership, this initiative will create a new streaming home for hundreds of the most sought after concerts, documentaries, and episodic series in music on The Coda Collection channel. It will become available via Prime Video Channels in the US on February 18th, 2021. The channel will roll out globally throughout the rest of 2021.
At launch, Amazon Prime members will be able to access over 150 titles streamed exclusively on The Coda Collection for $4.99 per month, with a free 7-day trial. New content will be updated regularly.
Among the titles being offered at launch include the streaming premieres of Music, Money, Madness…Jimi Hendrix In Maui, The Rolling Stones On The Air, Johnny Cash At San Quentin, Miranda Lambert: Revolution Live By Candlelight, as well as newly filmed, exclusive performances by such artists as Jane’s Addiction and Stone Temple Pilots.
Additionally, fans will be able to see the streaming premiers of Bob Dylan’s Trouble No More, the forthcoming authorized Dave Grohl documentary, and performances by Dead & Company.
“What’s being lost in today’s swarm of streaming services and search engines is the deep connection that is fueled by the stories that surround all the songs and artists that we love. The Coda Collection is being built to bring to life all the stories between the songs for both artists and fans,” said Jim Spinello, CEO of The Coda Collection.
About the new venture, Yoko Ono said, “John [Lennon] was always on the cutting edge of music and culture. The Coda Collection will be a new way for fans to connect on a deeper level.”
The Coda Collection will also present original, episodic music programming series as well as new and rarely seen performances by such leading acts as Pearl Jam, Foo Fighters, Avett Brothers, Tedeschi Trucks Band, Tyler Childers, Billy Strings, Paul Simon, AC/DC, and many more. The company has unearthed content from producers and vaults throughout the world; presenting concerts, documentaries, and recording studio footage unseen since their original broadcasts. Examples include rare and previously unseen titles featuring Marvin Gaye, Miles Davis, Muddy Waters, the Rolling Stones, Bob Dylan, Jimi Hendrix and much more.
“Our love for music and fascination for its history, pioneers, and continuing journey is what drives us,” explained John McDermott, Coda’s co-founder. “Music fans want more than just song streams and promotional videos,” continued McDermott. “They want concerts, documentaries, they want cultural context – and maybe most of all – they want to understand the stories behind the art and the artist. That’s how fans connect to one another, and to music itself.”
Janie Hendrix added, “The way the world appreciates music is evolving and changing. The Coda Collection is how we grow with that change. It transcends basic music streaming and takes fans on a real journey into the heart of the songs they love and the artists, like Jimi Hendrix, who created those songs. There will always be the desire to know more about Jimi, and what drove his creativity. So much went into his concerts and performances. There was background, a backstory, and depth to it all. Coda reveals all the various dimensions, and I’m proud to be a part of making it happen.”
The Coda Collection’s desktop and mobile site will feature world-class editorial content led by former Chicago Tribune music critic Greg Kot, and will bring valuable context and fresh perspectives to every video title in the library. Kot will enlist prominent music writers, critics, and cultural commentators to provide deeper context on the artists, the music, and the performances. This will include written editorial pieces, video interviews, original podcasts, and curated playlists. With new content updated daily, The Coda Collection will be a home for new and existing fans to experience the power of music in a uniquely immersive way.