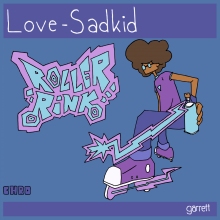 Love-Sadkid shares their new single “Roller Rink,” a throwback hip-hop anthem in the spirit of De La Soul’s “Saturdays.” The first in a series of new monthly singles Love-Sadkid has planned, “Roller Rink” was produced by Garrett, mixed by polearm.

Love-Sadkid has also inked a publishing deal with Angry Mob Music, an independent music publisher boldly
serving songwriters, composers, artists, and creatives. The deal is an exclusive co-publishing agreement
which covers all new Love-Sadkid works from the poetic rapper (real name Ben McGibboney), whose music has been described as lo-fi and wise beyond its years.

Bio:
Hailing from Irving, Texas, love-sadKiD is a prolific 17-year-old rapper — A lovestoned lyricist and a poet with a microphone. They have released a plethora of solo singles as well as two collaborative EPs with Dahm. The high school student is currently working on various EPs as well as a follow-up to their 2017 self-titled debut tape. With a confessional, sincere sound and an incredible ear for production (often leaning lofi), the Dream Easy and Cozy Collective affiliate is an artist best enjoyed with a side of sunshine. They were recently profiled at Ones To Watch.