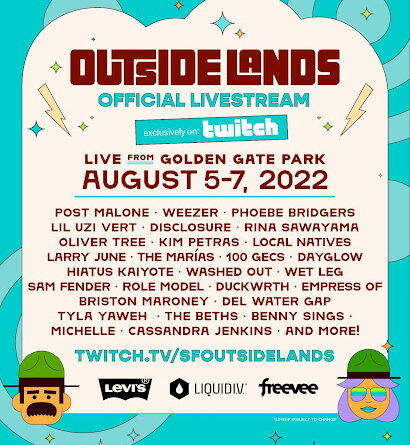 Outside Lands will again be teaming up with Twitch for an exclusive broadcast of this year’s festival happening in Golden Gate Park August 5-7. The livestream allows fans to sit back and enjoy some of the best music the festival has to offer, all from the comfort of their homes via the Outside Lands Twitch channel. Lineup of performers include Lil Uzi Vert, The Marías, Oliver Tree, Dayglow, Washed Out and more on Friday, Rina Sawayama, Local Natives, Larry June, Sam Fender and more on Saturday and Post Malone, Weezer, Kim Petras, 100 GECS and more on Sunday. See below for more of the Twitch stream lineup.

Twitch’s live streaming service offers an unparalleled level of interaction and connection to enhance attendees’ experience at the festival. With its massive, vibrant community and unique engagement features, Outside Lands presented by Liquid I.V., Levi’s® and Amazon Freevee on Twitch will bring the best parts of an in-person festival online.

Twitch will host over 8 hours of programming each day with a curated lineup of performances from the main three Outside Lands stages: Lands End, Twin Peaks and Sutro. Between performances there will be engagements with Twitch chat and interviews with artists at the festival.

Fans can tune in to the broadcast for free each day at twitch.tv/sfoutsidelands

For those who just can’t wait until Friday’s livestream to kickoff, Outside Lands and Twitch streaming duo Mystery School will co-host a pre-show Wednesday night (8/3) at 7:30p PT. Tune in and get your festival pre-game started early.

Liquid I.V. will be the exclusive sponsor of a Light Up the Night chat activation which will profile the festival lighting director, David Weiner, to understand how he selects the colors for the iconic trees of Outside Lands. Then fans will be able to vote on Liquid I.V. inspired colors to light up the trees in Golden Gate Park.

Levi’s® is the exclusive sponsor of the ‘Early Risers’ (artists to watch) segment. Levi’s® has a long history of supporting the next generation of music talent. And together Outside Lands and Levi’s® will be spotlighting artists making their festival debut, in what is sure to be the first of many Outside Lands performances.

Amazon Freevee will engage and excite the Twitch audience by releasing exclusive, never-before-seen clips of the Post Malone: Runaway documentary releasing August 12. Look out for interviews with the biggest Post Malone fans on the ground at Outside Lands in the lead up to his headlining set Sunday night, digging into why they love his music and quizzing them on some Post facts.