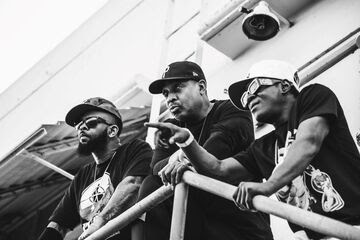 Rap
December 14, 2020December 17, 2020 rgarcia Public Enemy Release Official Video for "GRID" ft Cypress Hill and George Clinton
Public Enemy’s single “GRID” featuring Cypress Hill and George Clinton is a post-apocalyptic view of the world after it collapses into a technological desert after the “grid goes down” and, today, the legendary group shares the official video for the track. Directed by David C. Snyder, the video for “GRID” is the latest to come from PE’s recent critically-acclaimed album, What You Gonna Do When The Grid Goes Down?, and includes footage from their performance on The Late Show with Stephen Colbert. Watch the new “GRID” video HERE.
WATCH “GRID” FT. CYPRESS HILL & GEORGE CLINTON (OFFICIAL VIDEO) HERE
What You Gonna Do When The Grid Goes Down? marks the group’s historic return to Def Jam and includes guest appearances by Nas, YG, Rapsody, DJ Premier, Black Thought, Questlove, Cypress Hill, Run-DMC, Ice-T, PMD, George Clinton, Daddy-O, Jahi, The Impossebulls, Mark Jenkins, S1Ws Pop Diesel and James Bomb and Mike D and Ad-Rock of Beastie Boys.
The album features singles “Fight the Power: Remix 2020,” a powerful reimagining of their classic track featuring Nas, Rapsody, Black Thought, YG, Jahi and Questlove and riveted audiences at the 2020 BET Awards; “State of the Union (STFU)” which holds nothing back as it calls out Donald Trump and his destructive reign, produced by DJ Premier; and “Public Enemy Number Won” featuring Beastie Boys’ Mike D and Ad-Rock and Run-DMC.
Public Enemy have proven that rebellion is more than the sound of a musical genre, the culture of a social class, or the color of a skin; it is an unmovable, unmistakable state of mind and heart. PE is hellbent on creating change where it is needed most. Determined to give voice to those who have long been ignored, unafraid to question institutional injustices, and intent on challenging any and all obstacles to social justice, Public Enemy have resisted with unprecedented intensity and eloquence.
Their classic albums are the soundtrack to hip-hop’s rise as a form of social and political commentary. 1988’s It Takes a Nation of Millions To Hold Us Back was, and still is, one of the most important records ever made, with Rolling Stone recently naming it the #15 Greatest Album of All Time and The New York Times added it to their list of “25 Most Significant Albums of the Last Century.” Fear of a Black Planet–also named on the Rolling Stone list–features PE anthems including the original version of “Fight The Power,” “911 Is a Joke” and “Welcome To The Terrordome.” Most recently, SPIN Magazine named them to the #9 position on their “Most Influential Artists of the Last 35 Years” list.
As America faces a fresh rebellion against racial division and social inequality, it is no surprise that the world looks to hip-hop’s original champions of change to continue the fight alongside them. What You Gonna Do When The Grid Goes Down? is available now at www.publicenemy.com, along with exclusive Public Enemy merchandise.
PRAISE FOR ‘WHAT YOU GONNA DO WHEN THE GRID GOES DOWN?’
“a well-timed return to the center of the industry”  – Rolling Stone
“Updated versions of ‘Public Enemy No. 1’ and ‘Fight the Power’ prove the group’s message remains potent decades on” – Vulture
“In the hour of need, Public Enemy returns to fight the power once more.” – Billboard
“The most remarkable thing that immediately leapt out to me while listening to this record is how this group has continued to make such politically and potent work after more than 30 years together” – NPR Music 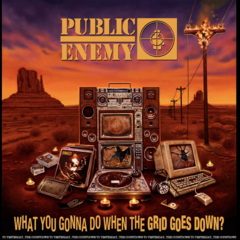