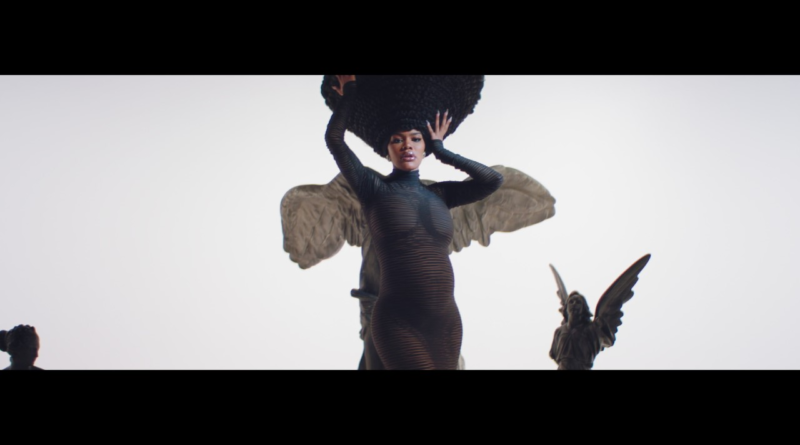 “’Lose Each Other’ is such a special record for me, and I wanted the visual to feel just as big,” said Teyana Taylor. “I told my team ‘you know what would be dope? If I could have Elton John open the video on the piano!!’”

Teyana continues: “Not that I thought it could really happen, but just putting it out there in the universe lol. So as we were working through treatment ideas and solidifying logistics for the video, an international phone number calls me…. and for a second I almost didn’t answer, but my intuition spoke, I answered. All I hear is…’Hello darling, it’s Elton. I’d LOVE to do your video!’ I FREAKED OUT!”

“When Teyana Taylor released her debut album, I became a huge fan. She was a guest on my Rocket Hour and I fell in love with her original spirit,” said Elton John. “Aside from her brilliant music, Teyana is one of the most visually dazzling artists working in music today. So I jumped at the chance to be in her latest video ‘Lose Each Other.’”

The exquisitely choreographed extended video treatment of “Lose Each Other” is underpinned by a cameo from Elton John on the grand piano. Teyana uses bold imagery, high fashion, and modern dance to brings new dimension to the original two minute song that was first heard on THE ALBUM.
“As a director I wanted the imagery to be simple, yet powerful, which is why I choose an all-white background and bold looks,” said Teyana.  “I wanted my audience to understand how love’s hardships can also be beautiful.

“Working with a legend like Elton was pure magic.  I feel so honored to have worked with someone of such legendary stature.  I am forever grateful to him for doing this for me!  Although we physically could not shoot together due to Covid, him and his team were very responsive all the way from London.  Y’all couldn’t even imagine how humbled I am, yet I’m feeling just a slight tinge of braggadocio, only a slight tinge though, lol like yeah, ya girl Tee & the legendary Elton John for the culture Pow! Just kidding…But seriously, thank you again Elton, you are TRULY a GEM!!!”

THE ALBUM was tapped by Pitchfork as one of the “most anticipat­ed albums of the summer.”  In addition to “Wake Up Love,” Teyana’s masterpiece included her new graduation anthem “Made It,” pegged by NPR as a “a triumphant, isolation-proof anthem for the Class of 2020.”  In August, it was announced that “Made It” was picked by President Barack Obama as one of the tracks on his 2020 Summer Playlist.

About TEYANA TAYLOR:
Being a jack of trades has enabled Teyana Taylor to become a master of all. From her smoky melodic vocals to her dynamic dance moves, the R&B superstar entertainer dips ’n dives between her talents as singer, songwriter, producer, director, dancer/choreographer, actor, fitness guru, model, and mother. When it comes to describing herself, the Harlem native can only think of one word: Everything.In 2014, Teyana’s love for the arts and R&B earned her the title of the first woman signed to Kanye West’s G.O.O.D. Music imprint. Teyana dropped her debut album VII in November 2014, which debuted at #1 on the Billboard Top R&B/Hip-Hop Albums chart in 2014, cementing her position in today’s modern R&B field.Soon after, Teyana went on to star in the internet-breaking video for Kanye West’s “Fade,” and scored her first MTV Moonman for “Best Choreography” at the 2017 MTV Video Music Awards.
Upon the release of her second album, K.T.S.E. (acronym for Keep That Same Energy) an 18-month chain reaction was set-off for Teyana.  She performed the summer­time Top 10 R&B smash “Gonna Love Me” on The Tonight Show Starring Jimmy Fallon.  Hip-hop audiences embraced the RIAA gold “Gonna Love Me” remix featuring Wu-Tang Clan’s Ghostface Killah, Method Man and Raekwon, whose video was directed by Teyana.K.T.S.E. then spun off the explicit “WTP (Work This P***y)“ whose video (again directed by Teyana) was nominated for “Best Dance Perform­ance” at the 32nd annual BET Soul Train Awards.  After releasing “Issues/Hold On” (whose video she directed), Teyana slayed the Ellen audience with her live performance of the evocative song in April 2019.  She was surprised on-air when Ellen presented her with the RIAA gold award plaque for “Gonna Love Me,” bringing it all full circle.With her all-female production company The Aunties, Teyana has also directed videos for her peers like T.I. (“You”), Monica (“Commitment”), and Lil Duval (“Pull Up” featuring Ty Dolla $ign), as fans like Ms. Lauryn Hill and Elton John praise her boss moves.  Teyana’s star continued to rise in the tumultuous year of 2020, with the Juneteenth arrival of THE ALBUM containing the essential single + video releases “Wake Up Love,” “Made It,” and “How You Want It? (HYWI?)”. She earned Video Director of the Year Award at the 2020 BET Awards.Part of what makes Teyana stand out from the rest is her ability to move with precision and poise in everything she does. From the studio to the stage, every idea is a project with the singer front and center with a vision all her own. With her musical inspirations like Aaliyah, Teena Marie, Mint Condition and Janet Jackson speaking to her soul, Teyana is aware her mission is larger than life. “I’m working on me every day and I think that’s my purpose,” she says, comparing her life to a never-ending book. “I’m still going, still mastering and being a better me.”