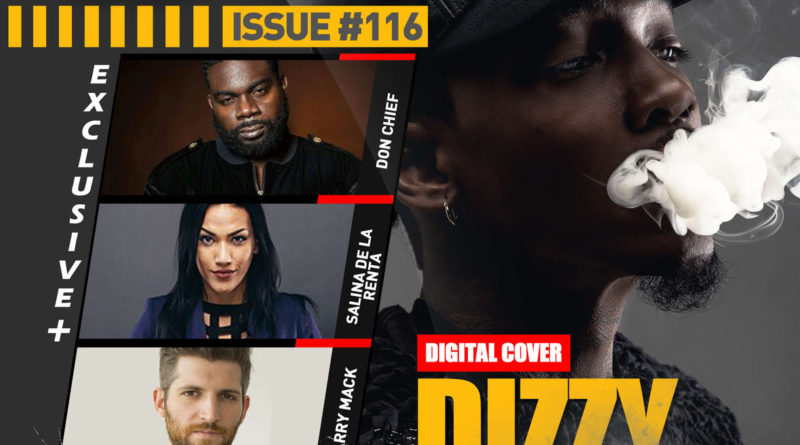 The Hype Magazine Digital Cover Issue #116 boasts a roster of stories which highlight a dynamic shift in the music industry…all surrounding the independent artist!!! From breaking out of the pack and claiming their own space to new financing options for indie creatives and imprints, it’s all here!

Dizzy Wright, known as one of the most chill rappers in the industry, is Still Movin and preparing for his next release in March entitled Nobody Cares, Work Harder” which follows his 2018 smash hit project “Don’t Tell Me It Can’t Be Done.” Dizzy burst on the scene in 2010 with the announcement of his signing to Hopsin’s Funk Volume label just before his 21st birthday which in fact, he basically celebrated onstage during his first official outing with the label in Denver, Colorado. A benchmark in his career, Dizzy tells us that night continues to hold a special place for him.

Now a serial entrepreneur as well as an entertainer, Dizzy is one of the industry’s prime examples of what CAN be done, if one takes the time to step back from the madness and collect one’s thoughts.

Money Money Money!!!! It all comes down to budgets when artists and labels are trying to get a project off and in the complicated world of music, it can be both difficult and bewildering. Sound Royalties founded by industry vet Alex Heiche is a company which offers financial support to musicians and songwriters and helps find hidden royalties to increase their bottom line. It affords musicians the opportunity to get music out to their fans, without giving up ownership of their publishing. If an artist has as little as $5,000 in royalty income in the recent past, the company can help the creator leverage that into advance money for their current needs according to Heiche.

Great music is the sum of all the parts that make it materialize, from concept, lyrics, and sound. This year, the 61st GRAMMYs will be host to a 1st-time nominee, Producer JBeatzz, an exciting creator with an exciting journey. From his time in Full Sail University’s Audio Engineering Program to his leap of faith after graduation, heading to Atlanta, Georgia and catching an internship at the famed Stankonia studios working with the iconic Big Boi of Outkast to now, with his first GRAMMY nod, it’s been non-stop action. JBeatzz earned his nomination for his work on Travis Scott’s RIAA Certified Platinum album Astroworld which is up for Best Rap Album. JBeatzz shares production credit on the album’s “Stop Trying to Be God” joint with Travis Scott and Mike Dean. JBeatz is also RIAA Certified Gold with the Nicki Minaj Queen Album for the record “CoCo Chanel” featuring Foxy Brown.

Rhyming “off top”, is one of the historic elements of Hip Hop which set apart some of its earliest heroes from the proverbial crowd. In this day and age, the skill may be most associated with the “battle rap” scene, however, still represents one of the more admired disciplines within the culture. Freestyle rap, executed well, tends to wow and amaze even the most experienced within the industry. One of the exploding stars of the game, Harry Mack may be a familiar face and voice if you watch commercial television, his recent “test drive freestyle” commercials with Mitsubishi were among the most entertaining of the season as the brand’s unique campaign ushered in the new Eclipse Cross model. Mack wowed potential customers with his rap prowess as he presented the car manufacturer’s new offering via rhyme.

Eddy Reynoso is one of the most sought out after trainers in professional boxing. According to the Los Angeles Times, Reynoso has been tutored by his father Chepo Reynoso in terms of boxing. The younger Reynoso has picked up some serious momentum and built a name for himself, since the days of fans and media members scratching their head on how he was able to land a talented fighter like Canelo Alvarez.

Over the years, Alvarez has remained loyal to the trainers that he started with in Mexico instead of jumping ship for a high profile name.

Reynoso was the mastermind of the game plan responsible for handing then undefeated middleweight champion Gennady Golovkin his first loss. This past September after the announcement that HBO was dropping its boxing coverage, streaming company DAZN offered Canelo Alvarez a monstrous deal of $365-million deal for 11 fights.