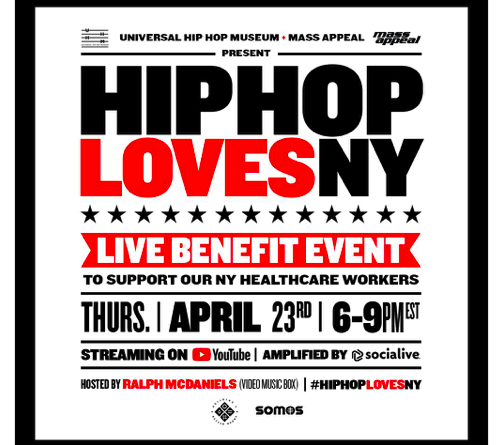 NEW YORK, April 21, 2020 – The Universal Hip Hop Museum and Mass Appeal have teamed up with YouTube to host Hip Hop Loves NY, a live stream simulcast honoring healthcare workers on the frontlines of the COVID-19 fight in New York. Set to air on Thursday, April 23 at 6PM EST, the event will be amplified by Socialive, an enterprise video creation & live streaming platform, and pushed across Universal Hip Hop Museum’s social media pages and streamed live on the Mass Appeal YouTube channel.

Proceeds raised from Hip Hop Loves NY will be donated to SOMOS Community Care, a network of over 2,500 healthcare providers throughout New York City and The Bronx Community Relief Effort, an effort focused on meeting the most essential needs in the Bronx as a result of the global pandemic via Text-to-PLEDGE, the official event donation service provider.

This is the largest collective of Hip Hop artists joining forces to save lives since 1989’s Stop the Violence movement. “New York has become the epicenter of the COVID-19 pandemic,” said Rocky Bucano, Executive Director of the Universal Hip Hop Museum. “It has shed light on the health and economic disparities in Black and Brown communities as African Americans and Latinos are dying at a disproportionately higher rate. This is a result of underlying health issues and major economic gaps in our city. The courage and the tenacity of the frontline healthcare workers serving in the most vulnerable populations is nothing short of heroic. We wanted to do something special to recognize their sacrifice and bring a little levity during this historic health crisis. This is how Hip Hop says thank you.”

Assemblyman Michael Blake echoed these sentiments as he stated, “The Bronx Community Relief Effort was created to help the people of The Bronx rise from this challenging time and what better way to get back on our feet than through Hip Hop to support our Healthcare Heroes who stand up for us every single day.” He continued “We know that The Bronx has Hip Hop Heroes, but, we also have Healthcare Heroes who need to be celebrated. From Montefiore to Lincoln Hospital, from St. Barnabas to Bronxcare, that one beat or perfect verse might give the energy to our Nurses, doctors, maintenance workers, clerical aides, hospital staff, patients and their families to press on for one more day.”

Peter Bittenbender, CEO of Mass Appeal, shared “Hip Hop has a history of supporting the community in times of crisis, we wanted to harness the power of music as a means to heal and reflect our humanity. The event is both an elevation of the NY community and an acknowledgment of the effect of coronavirus on all of us. We’re grateful to be a part of this.”

Highlighting the power of connection through virtual community, Socialive’s Founder and CEO, David Moricca exclaimed, “One of the challenges of COVID-19 is how to stay connected without physically being connected. In trying times like these, that connection is more important than ever. That’s why we’re thrilled to partner with the Universal Hip Hop Museum and Mass Appeal to provide a complete enterprise that can distribute live streaming video to multiple social media platforms in real-time — and to use the power of video to celebrate and support our frontline workers.”

About The Universal Hip Hop Museum
Anchored in the birthplace of Hip Hop, UHHM is the official museum of Hip Hop founded by its pioneers. The museum celebrates and preserves the history of local and global Hip Hop music and culture from the past, present and future. Built as a space for audiences, artists, and technology to converge and create unparalleled educational and entertainment experiences. Visit The [R]Evolution of Hip Hop, a sneak peek immersive journey through history as the museum gears up to officially open its doors in 2023. For more information visit www.UHHM.orgAbout Mass Appeal
Mass Appeal is an entertainment company dedicated to telling stories from the perspective of those who shape and shift culture. Since 1996, we have documented the emerging movements that influence popular ideas. Today, Mass Appeal is the elevated voice of Hip Hop and its ever-expanding sphere of influence. Integrated offerings in content, music and creative services stoke Mass Appeal’s ability to maximize the impact of our output. Our diverse school of thought separates us from friends and foes alike. For more information visit www.massappeal.comAbout Socialive
Socialive is an enterprise live streaming & video creation platform. Built for video pros and novices alike, our powerful yet intuitive platform makes it refreshingly easy to capture, create & distribute branded video content. Socialive is trusted by organizations from startups to the Fortune 100—including Viacom, McDonald’s, Walmart, and Headspace. We’re on a mission to radically simplify how the world makes video. For more information visit www.socialive.usAbout SOMOS
SOMOS is a non-profit, physician-led network of over 2,500 health care providers serving over 700,000 Medicaid beneficiaries in New York City. Launched in 2015 by its Chairman Dr. Ramon Tallaj, SOMOS is the largest and only physician-led performance provider system participating in the New York State Delivery System Reform Incentive Payment Program (DSRIP). The SOMOS network includes providers delivering culturally competent care to patients in some of New York City’s most vulnerable populations, particularly Latino, Asian, African-American and immigrant communities throughout the Bronx, Brooklyn, Manhattan and Queens. For more information visit https://somoscommunitycare.org/About The Bronx Community Relief Effort
The Bronx Community Relief Effort was born in the South Bronx immediately after the Coronavirus hit New York City. The Effort aims to raise $10 million to support effective, on-the-ground operations that are focused on meeting the most essential needs of the Bronx community. This includes filling gaps in public financing and broader grant programs. Donations collected are distributed in real-time within the community to those in critical need. For more information visitwww.thebronx.org