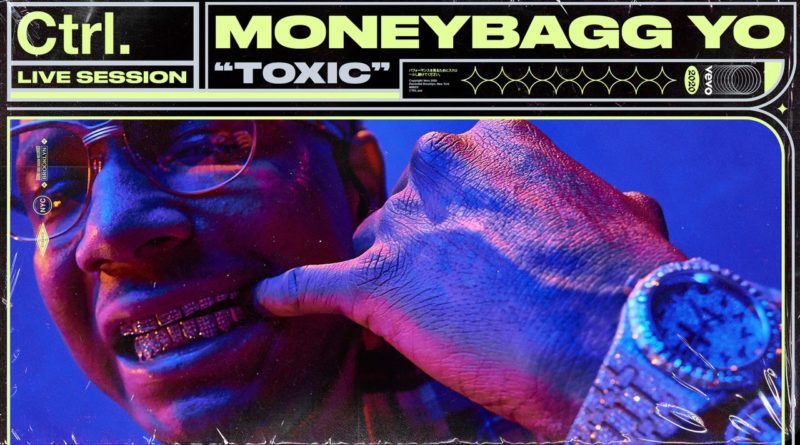 Vevo announces Moneybagg Yo as the next artist in their Ctrl series with performances of “Toxic” and “All Dat” premiering today.
Vevo’s Ctrl series highlights the work of hard-hitting, cutting-edge musicians making an impact in today’s music scene – both emerging and established. These artists demand attention, and Vevo’s Ctrl shines a deserving spotlight. Shot in Vevo’s Brooklyn studio, Moneybagg Yo’s performance follow sessions from Rick Ross, Common, Rapsody, Jeezy, Jadakiss, Fabolous, A$AP Ferg and more.
Memphis rapper Moneybagg Yo brings grit and menace to his rhymes about street life. The prolific MC began releasing mixtapes in 2012, and became a regular fixture of the higher reaches of the Billboard 200 chart starting with his Top Five-charting Federal 3X in 2017.
Born Demario White, his earliest mixtapes, From da Block 2 da Booth and October 20th, both appeared in 2012. Following additional tapes such as 2015’s Relentless and Federal, he began receiving more attention, and he won a Memphis Hip Hop Award for Mixtape of the Year. Released in 2016, Federal Reloaded featured Y Grizzle, Young Dolph, and OG Boo Dirty, while the follow-up, ELO (Everybody Lives On), included guests like Yo Gotti (“A Lot of ‘Em”) and Migos’ Quavo (“Days n Nites”). His work with Yo Gotti continued on a joint effort entitled 2 Federal.
Heartless arrived in early 2017 and charted on the Billboard 200. The album featured YFN Lucci (“Wit This Money”) and Lil Durk (“Yesterday”). Another mixtape, Federal 3X, followed later in the year, and debuted at number five on the Billboard 200. Months later, Moneybagg issued a collaborative mixtape with YoungBoy Never Broke Again, Fed Baby’s. He kicked off 2018 with the release of 2 Heartless. Peaking at number 16 on the Billboard 200, his 11th solo mixtape featured guests like Quavo and fellow Memphis rappers BlocBoy JB and Yo Gotti. Bet on Me, including appearances from Young Thug and Gunna, followed in August. That November, he issued his official studio debut, RESET. The album marked a new peak for the rapper, landing at number 13 on the charts. Another mixtape, 43va Heartless, arrived in May of the next year.
“Toxic” and “All Dat” are now streaming on all platforms. Keep up with exclusive content from artists all over the world on YouTube.com/Vevo.
ABOUT VEVO: Vevo is the world’s largest all-premium music video provider, offering artists a global platform with enormous scale through its distribution partners. Vevo connects artists with their audience globally via music videos and original content, working directly with them to find unique ways to bring their music to life visually. Vevo also works with emerging artists, providing them with a platform of global scale and reach, to find and grow their audience. Reaching 26 billion monthly views globally, Vevo has over 400,000 music videos in its catalogue.